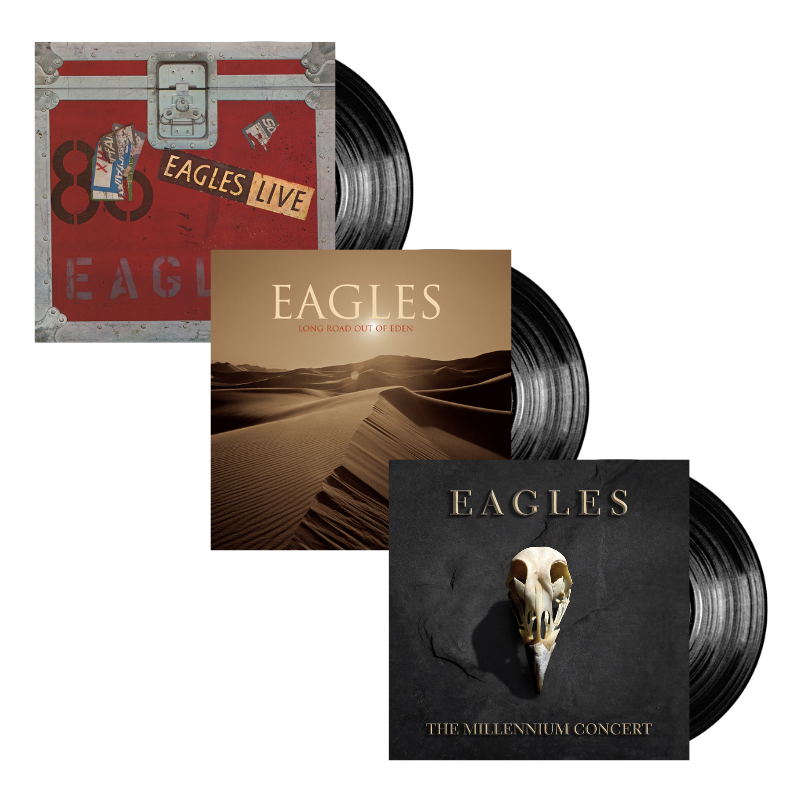 Eagles Live:
Eagles’ debut live album, featuring live recordings from California venues including The Forum, Santa Monica Civic Auditorium, and Long Beach Arena. These live performances are from the peak of their career, spanning 15 recordings from between 1976 and 1980. The live show includes some of Eagles’ biggest hits featuring “Hotel California”, “Desperado”, and “Take It Easy”. Originally released in 1980, the album is currently certified gold in the UK and x7 platinum in the US. The release is on 180g black vinyl, contains a poster, and features remastered audio from the Legacy box.

Long Road Out Of Eden:
Released in 2007, Long Road Out of Eden is Eagles’ seventh and most recent studio album. Previously released on a limited vinyl run, the album is currently certified x2 platinum in the UK and x7 platinum in the US. The album includes “No More Cloudy Days,” which is still performed as part of their current set, and includes singles “How Long” and “Busy Being Fabulous”.

The millennium Concert:
Recorded at the Staples Centre in Los Angeles, CA, this release marks a first time on standalone vinyl. Originally included in the Selected Works 1972-1999 CD boxed set, the live show includes some of Eagles’ biggest hits featuring “Hotel California”, “Please Come Home for Christmas”, and “Take It to the Limit”.