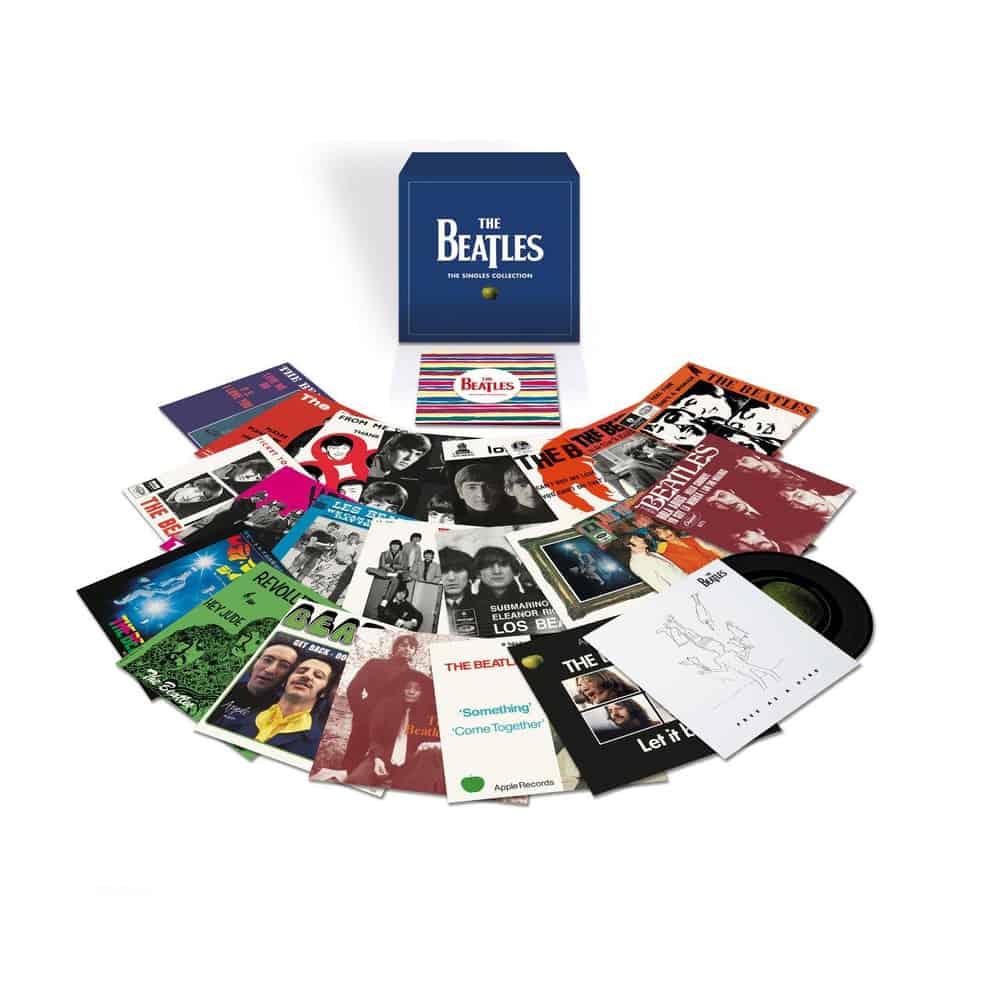 From 1962 to 1970, The Beatles released 22 UK singles; of those 44 A and B-side tracks, 29 were not included on the group’s British albums at that time. These singles, plus an exclusive new double A-side single for the mid-1990s-issued tracks “Free As A Bird” and “Real Love,” are newly cut for vinyl from their original mono and stereo master tapes by Sean Magee at Abbey Road Studios for a new limited edition boxed set. The Beatles: The Singles Collection presents 46 tracks on 23 180-gram seven-inch vinyl singles in faithfully reproduced international picture sleeves, accompanied by a 40-page booklet with photos, ephemera, and detailed essays by Beatles historian Kevin Howlett. The collectible set will be released worldwide on November 22 by Apple Corps Ltd./Capitol/UMe.


The Singles Collection offers a fascinating view of the creative trajectory of The Beatles’ John Lennon, Paul McCartney, George Harrison, and Ringo Starr across their relatively brief recording tenure together. Just three and a half years divide 1963’s “She Loves You” and 1967’s “Strawberry Fields Forever,” a remarkable, illustrative example of the band’s rapid, groundbreaking evolution. From the band’s star-making 1962 debut single, “Love Me Do” with its B-side “P.S. I Love You,” to their 1970 finale of “Let It Be” / “You Know My Name (Look Up The Number),” the new collection underscores The Beatles’ breathtaking creative arc.

Because it was rare in the 1960s for UK singles to be released in picture sleeves, the collection’s seven-inches are presented in reproduced picture sleeves from their original releases in several countries around the world, including Argentina, Australia, Austria, Belgium, Chile, Denmark, France, Greece, Holland, Israel, Italy, Japan, Mexico, Norway, Portugal, South Africa, Spain, Sweden, Turkey, UK, USA, and West Germany.

The Singles Collection follows the September 27 release of The Beatles’ Abbey Road album in a suite of Anniversary Edition packages. The acclaimed new edition’s Super Deluxe set features new stereo, 5.1 surround, and Dolby Atmos mixes by producer Giles Martin and mix engineer Sam Okell, plus 23 session and demo recordings, most of which were previously unreleased. Abbey Road’s Anniversary Edition releases returned the iconic album to the top of charts around the world. In the UK, Abbey Road reclaimed the No. 1 position on the official albums chart after 49 years and 252 days, breaking The Beatles’ own Guinness World Record previously held by Sgt. Pepper’s Lonely Hearts Club Band, which revisited the chart’s No. 1 spot in June 2017 with its celebrated Anniversary Edition after 49 years and 125 days.

Single 2 [Cover art from: Italy]
Please Please Me
Ask Me Why

Single 5 [Cover art from: Chile]
I Want To Hold Your Hand
This Boy

Single 6 [Cover art from: Austria]
Can't Buy Me Love
You Can't Do That

Single 9 [Cover art from: Spain]
Ticket To Ride
Yes It Is

Single 11 [Cover art from: France]
We Can Work It Out
Day Tripper

Single 15 [Cover art from: Germany]
All You Need Is Love
Baby, You're A Rich Man

Single 16 [Cover art from: Brazil]
Hello, Goodbye
I Am The Walrus

Single 19 [Cover art from: Portugal]
Get Back
Don't Let Me Down

Single 21 [Cover art from: Israel]
Something
Come Together

Single 22 [Cover art from: UK]
Let It Be
You Know My Name (Look Up The Number)