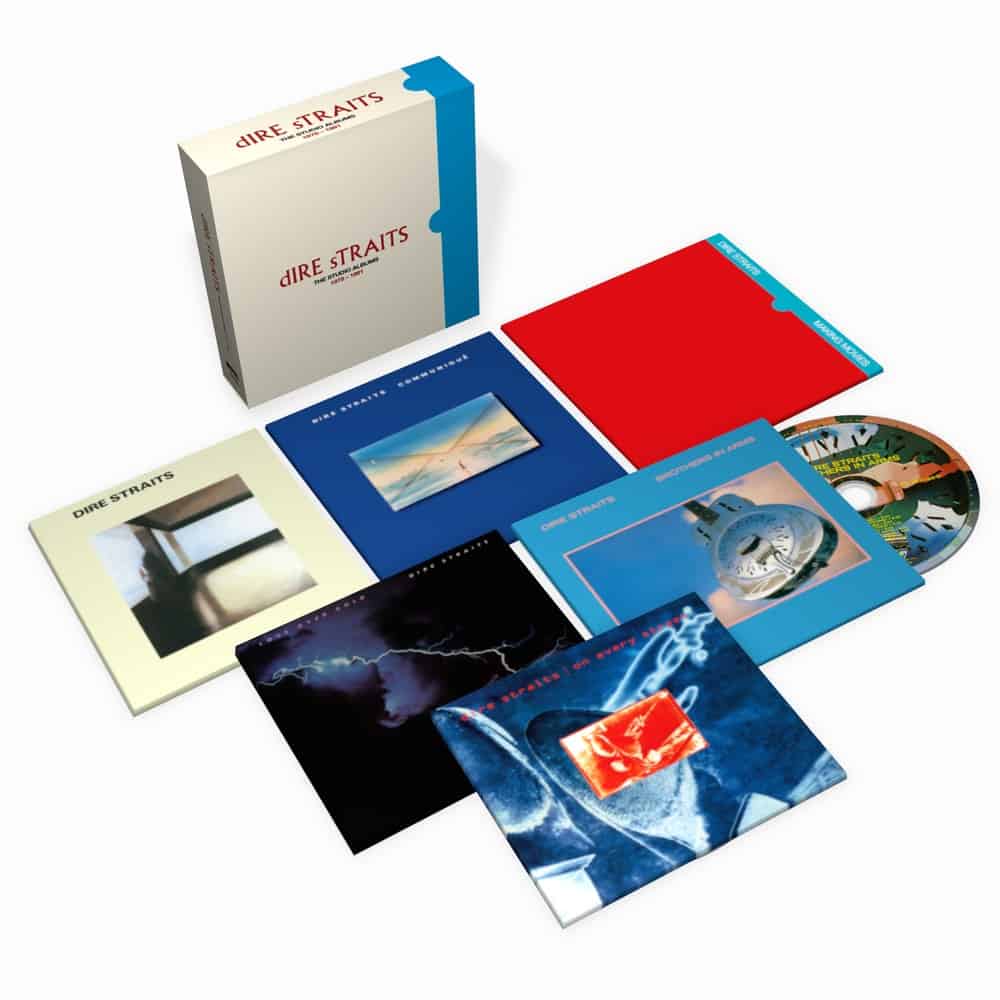 On 9th October, to coincide with National Album Day 2020, UMC/Virgin will release a 6 CD box set of all of the studio albums by Dire Straits, a band that straddled the globe with their sophisticated rootsy guitar rock wedded to literate story-telling lyrics. Emerging on the club and pub circuit in 1977, Dire Straits were led by charismatic Geordie singer-songwriter, record producer and composer Mark Knopfler, one of the most successful musicians the UK has ever produced, who is often cited as one of the greatest guitarists of all time.  Dire Straits’ sound defined the late 70s/early 80s with monster hits such as ‘Sultans Of Swing’, ‘Romeo And Juliet’, ‘Money For Nothing’ and ‘Walk Of Life’. Dire Straits’ 1985 album Brothers In Arms, a global No 1 and double Grammy Award winner, is one of the world’s best selling albums. After releasing their final album ‘On Every Street’ in ’91, Knopfler called time on Dire Straits in 1995 and set off on a new path as a solo artist.

Dire Straits – The Studio Albums 1978-1991 features the albums Dire Straits (1978), Communiqué (1979), Making Movies (1980), Love Over Gold (1982), Brothers In Arms (1985) and On Every Street (1991) - all of which are certified multi-platinum. The albums will come in a deluxe clamshell box with the CDs housed in mini-vinyl style cardboard wallets and each album will include a beautiful poster with the original sleeve artwork (including lyrics and credits).

CD 1 - Dire Straits
Down To The Waterline
Water Of Love
Setting Me Up
Six Blade Knife
Southbound Again
Sultans Of Swing
In The Gallery
Wild West End
Lions
CD 2 - Communiqué
Once Upon A Time In The West
News
Where Do You Think You're Going?
Communiqué
Lady Writer
Angel Of Mercy
Portobello Belle
Single-Handed Sailor
Follow Me Home
CD 3 - Making Movies
Tunnel Of Love
Romeo And Juliet
Skateaway
Expresso Love
Hand In Hand
Solid Rock
Les Boys
CD 4 - Love Over Gold
Telegraph Road
Private Investigations
Industrial Disease
Love Over Gold
It Never Rains
CD 5 - Brothers In Arms
So Far Away
Money For Nothing
Walk Of Life
Your Latest Trick
Why Worry
Ride Across The River
The Man's Too Strong
One World
Brothers In Arms
CD 6 - On Every Street
Calling Elvis
On Every Street
When It Comes To You
Fade To Black
The Bug
You And Your Friend
Heavy Fuel
Iron Hand
Ticket To Heaven
My Parties
Planet Of New Orleans
How Long